Is the NCAA failing its college athletes? 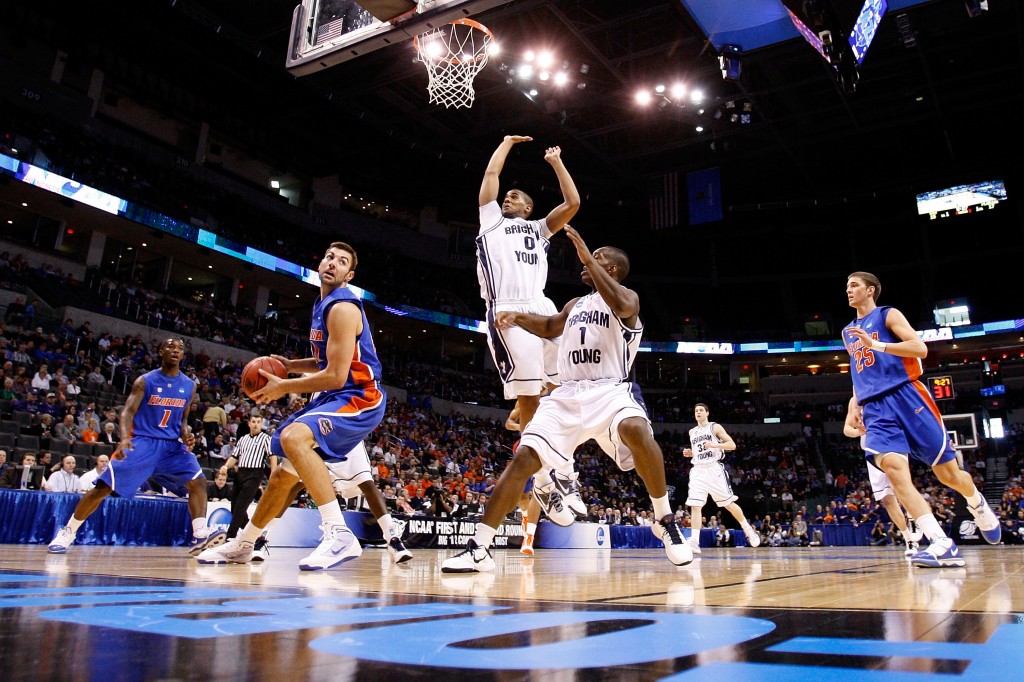 That’s the question economics correspondent Paul Solman tackled in Making Sen$e’s latest report. The NCAA makes billions of dollars in television deals alone, but college players don’t see a penny of it. Sure, many receive student scholarships, but is that enough?

Paul spoke to Ramogi Huma, the founder of the National College Players Association, which advocates for college athletes across the nation. A former Division I football player himself, Ramogi believes the NCAA needs to offer more protections to college athletes.

Paul Solman: How did you get started in this?

Ramogi Huma: During my first year playing football at UCLA, one of my teammates, an all-American linebacker, was suspended. He was talking about how tough it was to get by. He was on a radio show and said, “I don’t even have groceries. I don’t know what I’m going to do, because my scholarship check hasn’t come in.” Groceries appeared on his doorstep, and his roommate took them in. He ended up inadvertently eating the groceries, and when the NCAA found out, they suspended him. I was a true freshman on campus, and I was also struggling trying to get by — you know, food was tough. I found out that he was suspended, and I see his jersey being sold in the student store, and I thought, this doesn’t make any sense.

Going into my summer workouts, we were told this was voluntary. And we wanted to go, but during that first meeting our NCAA compliance office stood up and said, “Look, if you get injured during these workouts, you’re on your own. Under NCAA rules, UCLA cannot pay for your medical expenses.” So at that point, I decided to talk to some of my teammates. My perspective was that college athletes have more power than this. Why aren’t we channeling this power? Why aren’t we getting together with players from other schools and forcing some change in this area?

Paul Solman: But you didn’t do anything about it then, did you?

Ramogi Huma: Well, within a year I had started a student group on campus. The idea was to get some other players together, to start exposing some of this and to get some changes made. I started that when I was a sophomore, and for a while, I didn’t know what I was doing. Eventually, you reach out to any union you’ve ever heard of. The steel workers responded and heard us out. So that’s why they’ve been supportive ever since.

Paul Solman: Were you blackballed?

Ramogi Huma: No, I wasn’t blackballed. I had already secured the support of my teammates and had a meeting with our coach. Once he realized we didn’t have any problems with UCLA, our coach Bob Tulido sort of confided that he didn’t agree with some of the things the NCAA did either. He wasn’t going out in front of it, but he wasn’t trying to stop us either.

Paul Solman: What’s the exploitation you see in the system?

Here’s a professional sports industry in America in football and basketball — a multi-billion dollar industry — where the players don’t have the leverage to try to pursue their protections they need.

Ramogi Huma: Well, we have a system right now in NCAA sports, where there is about $1 billion of revenue coming in every year from recent TV deals. And yet, in NCAA sports, you have players who can be stuck with sports-related medical expenses, injured players who can lose their scholarships, graduation rates hover around 50 percent among the sports who are generating this money, and the NCAA is refusing to adopt the same concussion reforms that the NFL has adopted. So many of these issues are serious issues, and the NCAA is doing nothing, and it’s failing its players.

Paul Solman: Is the NCAA that unusual as an organization?

Ramogi Huma: I think college sports is its own beast in general. But I think what’s unusual is that in this powerful industry, there is no counterforce. The players aren’t organized. If you look at the other professional sports industries in America, those players have a voice, they have their unions. But here’s a professional sports industry in America in football and basketball — a multi-billion dollar industry — where the players don’t have the leverage to try to pursue the protections they need.

Ramogi Huma: Well, multibillion dollar TV revenues, multimillion dollar coaches, sponsors’ logos on players’ bodies doesn’t sound like amateur to me. That’s professional, and that’s OK. In America, we celebrate professionalism. But what’s not OK is for all this money to be made and for players to be without protections.

Paul Solman: How much would players get as employees?

Ramogi Huma: I think people revert to the “play for pay” talk. And the fact is college athletes are already paid. They are paid in the form of scholarships; they provide work, and it’s conditional. But the NCAA restricts players’ value and compensation. What do I mean by compensation? It can mean medical expenses, or it can mean an education trust fund for players who don’t graduate on time, so they can take an extra semester or two when they’re done playing to actually complete their degrees. Compensation can come in many forms.

Paul Solman: What happens to the guys who don’t finish college?

Ramogi Huma: They put it all on the line with the promise of an education, they give 40 to 50 hours a week to their sport, and they don’t have any support when they don’t finish on time. Those guys are still subject to the same concussion risks, and who knows what’s in their future? These are guys going through life without a degree, without the added bump in terms of salary and things like that. They forgo the most valuable part of their time, not voluntarily, but because the NCAA said so, and the NCAA had the power to strip them of their value while they were in college.

Paul Solman: What do you mean the NCAA has the power to strip them of their value?

Ramogi Huma: Well, the NCAA says you can’t receive endorsement money. If you can’t receive extra money for degree completion from your school, then the NCAA has the power to prevent players from receiving support. And in turn, a lot of players won’t graduate, and they’ll go through life potentially with broken bodies.

Paul Solman: What has happened to your teammates on average?

Ramogi Huma: It’s hard to know. If the NCAA has that information, they don’t make it available. A lot of people are asking, “What about the guys who are out? Did they get their degree? If so, where are they working?”

A lot of them are pushed into these jock majors, these easy majors. Do these jock majors actually turn into robust paying jobs? Are the jobs below the average salary for a college graduate because of what they majored in? What kind of medical expenses have they faced? And for the people who don’t graduate, where are they?

Paul Solman: But isn’t college a broadening experience for anybody who goes there — particularly kids from less advantaged backgrounds?

Ramogi Huma: I think it definitely can be. I think it’s an avenue to open up potential opportunities that some of these players otherwise wouldn’t have. There’s a lot of potential in it. Our goal is not to blow up the NCAA, it’s to reform it — to keep the good, but to get rid of the bad as much as possible. So I don’t think it’s an either/or equation. We’re trying to get it to a level that is acceptable for players.

Paul Solman: But in order to run their athletic programs, don’t these universities need a lot of revenue?

Paul Solman: Are kids from modest or poor backgrounds better off for having gone to college even if they don’t graduate and don’t have their medical expenses covered?

Ramogi Huma: I think it’s hard to say. If you’re that player who incurs a significant injury that’s going to cripple you for a long time and don’t have the support from your school to pay for those expenses; if you’re a player who gets abused by your coach and are forced to play on serious injuries; or if you’re a player and the coach is hitting his players, punching them and kicking them — like at Rutgers with Coach Mike Rice — it’s hard to say.

Alternatively, might those players have made progress in a vocational type of an arrangement? Or might they have gone to community college or found a way to get to college without sports? I think it’s tough to know definitively. But the narrative now is that magically you get to go to college, and magically it’ll all be good even if you don’t graduate. I don’t buy into that at all.

Paul Solman: But a guy like Kevin Ware, the Louisville basketball player who suffered a famously grotesque leg injury during a game, wouldn’t be covered by the school for that injury?

Paul Solman: But they did wind up paying.

Ramogi Huma: When questioned about it, Louisville said that they would pay for his medical expenses, but when questioned whether they’d pay if he needed surgery in a few years down the road, their answer was, “No comment.”

Paul Solman: And what happens to the families of young men who have died playing football? Have they been compensated?

Ramogi Huma: The NCAA has a death benefit of $25,000, and each case is different. It has to be a qualifying event. I believe that those events would qualify with the exception of Owen Thomas from Penn who committed suicide and was later found to have CTE. And obviously that’s a big buzzword.

Paul Solman: What is CTE?

Ramogi Huma: CTE is Chronic Traumatic Encephalopathy. It’s the brain disease that has been found in former NFL players and college players who have committed suicide at a young age. It’s a brain disease similar to Alzheimer’s that affects players’ impulse control and anger and can cause depression and a lot of different cognitive problems.

Paul Solman: But you’re not advocating that student athletes get their full share of the revenues that come in from the sports they play?

Ramogi Huma: No, we’re not. We’re not advocating for professional salaries and things like that, but we’re saying that, “Look, some of that value should be given in the form of basic protections, like medical expenses and degree completion.”

The alternative we already know. It’s going to go to the coaches’ salaries, the athletic directors’ salaries, bloated administrative overhead, facilities, luxury boxes and stadiums. And there’s a critical need for players, but there’s not a critical need for those folks. They’re already taken care of, and that’s fine, but there’s an opportunity with this new money, the new $1 billion per year, for some of that to go towards the issues players face.

Paul Solman: Do you think it will?

Ramogi Huma: I’m optimistic. If I didn’t think it would, I wouldn’t be sitting here fighting for it. But it’s going to be fight. Don’t make a mistake about that, it’s going to be a big fight.