Study: “The $6 Billion Heist: Robbing College Athletes Under the Guise of Amateurism” 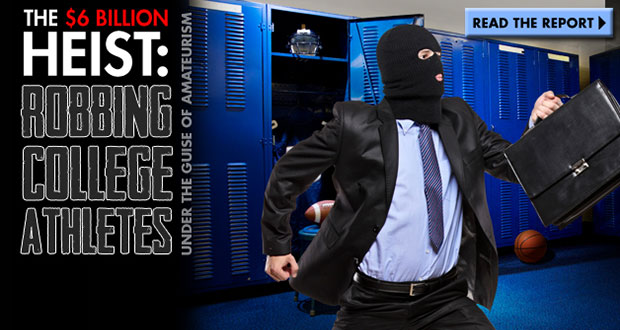 The National College Players Association (NCPA) and the Drexel University Sport Management Department published a joint study in 2013 showing that FBS football and men’s basketball players would receive an additional $6 billion between 2011-15 if not for the NCAA’s prohibition of a fair market.

Titled “The $6 Billion Heist: Robbing College Athletes Under the Guise of Amateurism”, the study uses publicly available information to determine the fair market value of football and basketball players, the value that they receive from their full scholarships, and the amount of money that revenue producing athletes would receive in a fair market.

The study shows that the average football and men’s basketball players from BCS conferences would receive an average of over $714,000 and $1.5 million, respectively, above and beyond the value of their full athletic scholarships over the four years between 2011-15. Players on the top ten revenue-generating basketball teams will each be denied over $3.5 million, including Louisville basketball players who will miss out on almost $6.5 million apiece.

Players Speak Out In Protest

UCLA quarterback Brett Hundley, an economics major, stated, “America’s economic system is supposed to operate on free markets. This is a lesson on how damaging it can be when a cartel stifles a free market and, unfortunately, college athletes are the ones on the losing end. It’s not right.” UCLA players’ “full” scholarships left them $3300 below UCLA’s full cost of attendance in 2012.

University of Georgia football player Chris Burnette and his teammates each had a fair market value of $410,000 in 2012, and will be denied over $1.5 million over their four-year careers. They received scholarships worth only $19,000 with a room and board allowance that left them living about $2500 below the federal poverty line in 2012. Burnette said, “If you look at the billion dollar TV deals, conference realignment, shoe company logos on our uniforms, and the salaries of coaches, ADs, and the NCAA president, it’s clear that NCAA sports isn’t amateur. The NCAA is using amateurism as a scam to rob us during the most valuable years of our lives.”

Georgia Tech football player Isaiah Johnson stated, “"The NCAA is a very manipulating company. It tries to convince us it's all about educating players. In actuality, the NCAA is using athletes to create a multibillion dollar industry that pays everyone but the players." In 2011, the NCAA stripped Georgia Tech football players of their ACC championship after a player accepted $312 in clothing.

Clemson football player Robert Smith stated, “The NCAA has nothing for those of us who might suffer brain trauma and many other medical problems from playing NCAA sports. Some of these finances could be put in a trust fund that could help pay for medical bills that many of us will face, grad school, or other important things.”

The NCAA claims that, over their lifetime, players who graduate can earn up to a $1 million more than their peers who don’t have a college degree.

NCPA Executive Director Ramogi Huma who co-authored the study stated, “Our study shows that players with degrees will spend the majority of their lives making up for the value that the NCAA took from them during four years as a college athlete. Many won’t come close to making up for the difference.” In addition, close to half of football and men’s basketball players do not graduate and, therefore, have a much less likelihood of ever making up for the loss.

The NCAA and its member colleges have also argued that the value of an athletic scholarship is payment enough. However, the study found that, with the exception of Tulane football players, every FBS football and men’s basketball player had an average fair market value of $137k and $289k, respectively. The average full scholarship was worth just $23,000.